I wish I could mandate that you must be vaccinated and masked to read this column, but since I can’t I can only hope that those of you who can will be if you plan to venture outside once again –and especially, inside.

In times like these, one of the best, most soul-healing things we can do is read poetry.

Our poet today is one I have wanted to introduce for some time.  Here she is: 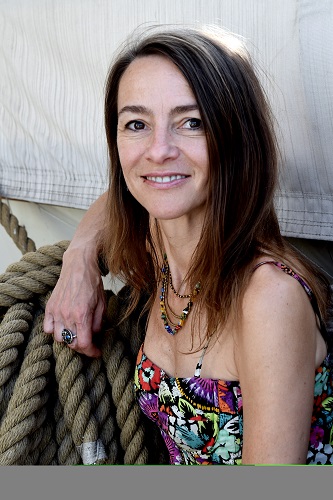 This lovely poet learned English in school in Romania, from a teacher who lent them books in English such as “Catch-22,” “Lord of the Flies” and “The Catcher in the Rye.”

Amazingly, she also had her students listen to records with The Beatles, The Rolling Stones, Janis Joplin, Jimi Hendrix, Bruce Springsteen and Leonard Cohen – just like so many American teenagers.

Mihaela came to the U.S. when she was twenty-four to pursue graduate studies and since then has published a number of successful poetry collections. Among them are Cemetery Ink (University of Pittsburgh Press, 2015) and Father Dirt (Alice James Books, 2010).  She was the translator of Liliana Ursu’s  Clay and Star (Etruscan Press, 2014) and Carmelia Leonte’s The Hiss of the Viper (Carnegie Mellon University Press, 2014) and is the editor of Insane Devotion: On the Writings of Gerald Stern (Trinity University Press, 2016).  With her husband, the well-known poet Michael Waters, she co-edited Border Lines: Poems of Migration (Knopf, 2020).  Currently, she is the translation editor for Plume and associate professor of English at Monmouth University in New Jersey.

It’s my pleasure this morning to introduce her with the following three poems:

especially when someone’s around.

Hands in suds, I turn to make sure

my husband’s out of sight.

How is he supposed to brush his lips

along the flute of my spine

once he catches my mom’s appraising eyes

Jesus, what’s with you Romanians, he once lost it

when, only days after being repulsed

by couples straddling each other’s backs

on an overcrowded Black Sea beach,

we almost soared off a cliff

as my cousin leaned from the passenger seat

toward her lover’s neck to nick one out.

Mom can’t understand what the big deal is.

to care for intimate business.

Seventy dollars so you can call it ‘back facial,’

as if you can’t tell your face from your ass.

Or the parents you unload into ‘homes’

then take on extra jobs to cover the indecent costs.

24/7 among strangers you wouldn’t have chosen

My love steps in and hugs me from behind,

showered and balmy as wild chamomile.

For once I’m grateful he doesn’t know my language.

What’s with this heated conversation? “No big deal,” Mom serves in English

“We battle about national tradition. She won.”

not eyes per se, but how they instigate,

ignite the body from within, that two second

ocular tryst that no tangible can match

when the strange eyes that enter yours,

and when lanced with a suggestive glance,

made sure to avert mine —

until now, when the daily stroll

parallel to the beach is measured

not in miles, but eyes.

Behind each mask, breath reveals

its nature, and it stinks.

The iris is the sole internal organ

visible from the outside,

my father professed to justify

on the streets of Manhattan,

the troubles he got himself into.

I walk the day to harvest

what I see —blots of color,

stealing what the subjects

don’t know they can give.

Elegy for my mother’s employer

Why not, she’d snap as she ordered the tiles scrubbed raw

sixty-five pansies planted then replanted closer to the brick border

no not the lotus-shaped candles.

Why not swill fine cellar wine directly from the bottle

why not waltz while mother cooks onions in the rain

so they won’t pollute the inside with their crass smell

why not waltz naked, extoll your small frame

and freckled breasts, why not kick across the floor

each cocktail dress in search of the one

that will outshine the daughter.

Why not, she repeats, like a mantra, why wouldn’t I?

Six months of this shit’s enough, I tell my mother.

I’d heard how Romanians treat their own,

harping on how much worse their lives

would be back home, but now the rage

is personal. Pack up, we’ll come get you.

no harm. She’s just having a hell of a time

dying in this marmoreal house

in a language that trips the tongue,

so far from the steamy furrows of native ground.

Next post: The Historical Influence of Psychoanalytic Concepts in the Understanding of Brain Injury Survivors as Psychological Patients