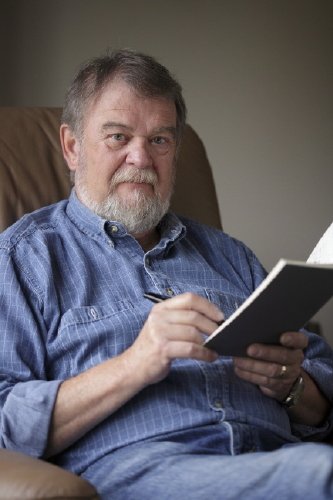 Please note:  Our poetry editor will be on vacation for July and August and will be back in September.

At the risk of appearing Massachusetts-centric (and how could I not be, since it’s my adopted and poetry-rich state?) I must introduce another of our poets to you on this spring morning.  Gary Metras, deservedly, was inaugurated as the  Poet Laureate of the City of Easthampton, Massachusetts in April of last year.  He is the author of seventeen poetry collections, most recently Captive in the Here (Cervena Barva Press, 2018) and White Storm (Presa Press, 2018), as well as thirteen chapbooks, many essays and reviews and anthologies.  A recipient of the Massachusetts Fellowship in Poetry and the Split Oak Press Chapbook Award, his  Francis of Assisi was selected as one of the Massachusetts Recommended Books of the Year (2009) by the Massachusetts Center for the Book.  His day job is editor, publisher and letterpress printer of Adastra Press, but he could scarcely be called an elitist.  In his lifetime he has worked as a store clerk, tobacco picker, short order cook, hod carrier, air traffic controller (U.S. Air Force), bookstore manager, high school English teacher  and college writing instructor.  Whew!

Are you as out of breath reading this as I am writing it?

Hard as it may be to believe that he has time for anything else, Gary also manages to be an avid fly fisher and is past President of Pioneer Valley Chapter #276 of the conservation non-profit Trout Unlimited.  He fly-fishes the streams and rivers of western Massachusetts as often as possible.

As an avowed feminist, I probably should feel apologetic about having featured so many men lately in this column, but I don’t.  There will be more women to come, and the men featured thus far have all been excellent poets, hard to resist for a lifetime reader of poetry.

It doesn’t bother me to have
lint in the bottoms of pant pockets;
it gives the hands something to do,
especially since I no longer hold
shovel, hod, or hammer
in the daylight hours of labor
and haven’t, in fact, done so
in twenty-five years. A long time
to be picking lint from pockets.
Perhaps even long enough to have
gathered sacks full of lint
that could have been put
to good use, maybe spun into yarn
to knit a sweater for my wife’s
Christmas present, or strong thread
whirled and woven into a tweedy jacket.
Imagine entering my classroom
in a jacket made from lint.
Who would believe it?
Yet there are stranger things—
the son of a bricklayer with hands
so smooth they’re only fit
for picking lint.

The bride-to-be sews
a pillow for the marriage bed,
cross-stitches a design from Ukraine
so old it’s not in any book,
but shown by grandmother
to mother, to daughter.
The cloth white
as a winter field near Lviv.
The needle pulls thread, tight:
A red, deep as pain, or love,
works its way through snow;
the green, the brown of earth,
live again in young hands;
a thin gold line is the hope
for greedless wealth;
pink is for baby’s cheek;
two blues color sky and dream;
black confines the shapes.
At the pillow’s center
a bird flies.
She locks the bird
in chains of diamonds
far from the flowers along the edge.
Each time the needle enters cloth,
she whispers, do I believe
he loves me?
A thousand stitches, a thousand whispers
and in the last knot,
tucked and tufted on the inside
where no one else can see,
is the answer.

From The Moon in the Pool by Gary Metras (Presa Press, 2015)

Twenty-two hugs the baby gives and takes
today. To say she has croup and is needy
is not enough. Yes, attention, reassurance,
the way Shasta daisies in the garden depend
on sun, that warmth, that yellow love,
the clear, shiny air glowing its petals like
the tiny fingers reaching up to me. Between
coughs, the baby’s moist eyes smile,
not knowing what illness is, but certain
the someone larger cares, holds her dear.
In my hug, the healing already begun.