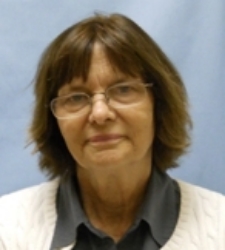 Good morning – and a Happy, Happy New Year 2020, everyone!  It is indeed, hard to believe, isn’t it?  Not only a new year but a new decade – one in which we hope to bury  or rid the world of the unpleasantness and even horror of 2019.  I say “the world,” because it isn’t only here in the U.S. that we have been experiencing so many negative things.  At any rate, poetry is something that helps us to live our lives and to stay resilient.

The photo above may look familiar, because Hilde Weisert has been depicted here before.  She was one of our featured poets in 2015.  So why is she back?

Well, it’s because I came across a new poem of hers that I thought was terrific – and if you’ll indulge me in this, I wrote and asked her for more.  The poem, “Grandfather Balloon” will appear below, after I tell you a bit more about its author.

Hilde Weisert is not only a poet but a scholar and events coordinator.  Her 2015 poetry collection, The Scheme of Things, with cover art by Jim Haba, was published by David Robert Books.  Her poems have also appeared, as might be expected, in many literary magazines, including Ms., The Cincinnati Review, The New York Times, The Cortland Review, Prairie Schooner, The Sun, Southern Poetry Review, Lips and others.  In fall 2019 her essay, “Randall Jarrell and Adrienne Rich: A Found Guide to Mutual Admiration,” was published in Hudson Review. Awards for her poetry include the 2017 Gretchen Warren Award (New England Poetry Club), the 2016 Tiferet Journal Poetry Award, and the 2008 Lois Cranston Poetry Award.

For many years she worked for the Geraldine R. Dodge Foundation as a Dodge poet at the famous Dodge Festival in New Jersey, one of the largest poetry events in the U.S.  She was also a teacher in the Poet-in-the Schools Program, under their sponsorship.

Currently, she divides her time and residence in two places: Sandisfield, Massachusetts, a small town in Berkshire County, and Chapel Hill, North Carolina.  She is co-president of the Sandisfield Arts Center, a lovely, active place which has recently undergone renovation to make it more lovely and provide room for even more activity, some of which I have experienced.

One such event — and testimony to the quality of her scholarship, was held on September 28, 2019.  Called “Today’s Poets in Conversation with the Masters,” the poems of masters such as Frost, Auden, Plath, Owen, Bo9land, Kumin, Bynner and Yeats were performed by famed British singer Ben Luxon and other Sandisfield players.  Most interesting was that she brought back the words of a poet once famous but nearly forgotten, Witter Bynner. Following are three poems by Hilde Weisert.  The first, “Grandfather Balloon,” is the one that reminded me of how much I appreciate her work.

Grandfather, Balloon
How Deep Is the Ocean

A balloon in a jazz room is odd, especially one
not gaily skimming the rafters but resting
like a big cartoon baby on the table, bobbing slightly
in front of an old man who sits waiting
for the first notes of a Berlin ballad
he once heard Lee Wiley sing. Tonight,
the singer is his granddaughter, and he’s deaf.

But as a word “grandfather” surely holds a child, and play,
as much as age and dignity, so why shouldn’t the old man
hold this red balloon, light and smiling?
When Alexis starts to sing,
he tips his head to it, lifts his fingers
so they barely graze its skin, and from then on
his smile and nodding head are right in time.

I know the song’s question wasn’t meant for an answer
(the rippling depths its marvel), but I think we are seeing it
in what travels from the stage to this table,
from one shore to another, from the young
singer to the grandfather holding a child’s toy and hearing
the waves as they arrive on the skin of a balloon
into the skin of his hands, into a song about love.

Published in The Cortland Review, Issue 44 (http://www.cortlandreview.com/issue/44/weisert.html) and in The Scheme of Things by Hilde Weisert, published by David Robert Books, Cincinnati, Ohio. 2015.

“I learned to talk from my mother,” I said,
and was startled: Doesn’t everyone?
But “learned from”—
as if it were playing the piano,
or making the sylsalat at Christmas?
But it was: Her speech,
invented for me, her patience
letting my mouth and tongue
work the vowels, open
and open, then clench consonants
hard in my teeth, all nibbled edge,
and me still making of it a gibberish,
a babble; a glottal soup,
a drool;

My answering nothing but a rhythmic rumination
of nonsense syllables. But she kept on,
now a whisper, now a song, and in a while
the words became words: Epitome
and punctilio, modicum
and masterly; plenty of slang
like vamoose and delish, and play
in the “Ditto” that either one
could say, and smile (a secret).

This language of the days
of our small world, dangled from,
rolled in, colored and toddled,
and finally slept on, a pillow,
the sun,

Is now so many vocabularies ago, fields
of cultivated speech—
But with this odd sentence I remember
what came first,
the ravishing world she made
me take, word by hungry word,
and how much more there is to tell
in our original language.

The sure animal that moves towards us . . . Rilke

Frost never mentions fear.
Am I the only one who sees the bear,
the stalking cat? A hundred years

have brought them back. I’d like to dare
the poet’s walk into the woods – I own
them, after all. The deep otherwhere

is mine, but even though I came to be alone
now that the light’s down to a shard,
stones strewn, path overgrown,

creatures that the poet wrote in words
are real — and anywhere.  I have to clang
my bell to ward off bears, cats… giant birds

of prey. I’m not Orpheus, who sang
wild animals into calm, the rocks and trees
to guide a darkening way. Human lang-

uage has names for what it sees…But in these woods, there’s so much more. I hear
what I came for, Rilke’s infinity.

plus this drumming heart, this clanging fear.

Previous post: Boundary Violations: Traversing the Minefields of Sex and Love in the Consulting Room with Elizabeth R. Goren at CFS

Next post: Just Mercy: The cruelty of Alabama’s death penalty