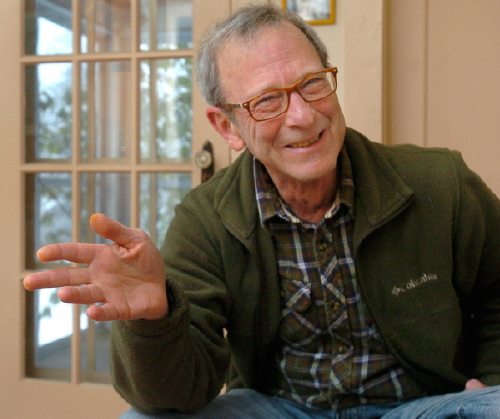 Good morning, everyone – and Happy Spring at last, wherever you are (not only you, but actual spring, which we are barely seeing, here in the Northeastern U.S.,where we’ve almost forgotten what the sun looks or feels like.  But the leaves are out, some of the flowers are, too, and the last scraps of snow are gone.

Soon it will be Mother’s Day, and I hope you’ll think of poetry then, in your wishes for whichever her or hers you’re honoring.

I didn’t know until recently that I did indeed know Howie Faerstein and his fine poetry and didn’t remember that we had met years ago.  But now I do know and am glad, not only to make his acquaintance once again but to share his poems with you.

Howie Faerstein’s first book of poetry, which I highly recommend, was Dreaming of the Rain in Brooklyn (Press 53, 2013).  This was followed a few years later by Googotz and Other Poems (Press 53, 2018).  His work can be found in numerous journals, as well.  Considering himself an “adjunct emeritus,” he is presently doing the admirable work of volunteering as a citizenship mentor at the Center for New Americans and is Associate Poetry Editor of CutThroat, A Journal of the Arts.  After living in Brooklyn for fifty years, in the Berkshires in Western Massachusetts and then in New Mexico and Colorado, he now lives in Florence, Massachusetts.

It’s a pleasure to introduce you to his poems with the three that follow:

& Goldie beamed brighter than Tycho’s stella nova
when I placed the pizza box down on the dinette table
for she had asked in her damaged Hungarian tongue
that I bring it to her, but secretly
so the orthodox caring for her
wouldn’t know.

from Googotz and Other Poems

On the surface of the Moon he had the thought he’d never die.
Now he realized he was better off
dead because of clowns counting

silver pieces in the marketplace.
And because of wooden houses topped
with bricked chimneys and the unaccustomed

light, the astronaut felt cornered,
for on Earth people are supposed to lead
their own lives; it was difficult for him

because of the fantastical insects and what the trees looked like,
standing every which way, taking no heed
of the constantly changing weather or loud voices on the street.

Doorsteps and thresholds confronted his every turn.
He was continually confused over sixes and nines
and the two meanings of “refuse”

and since he had seen the rising earth
and knew how slight it was—
here vast numbers of cemeteries bordering commerce,

the heaviness of home rooting him–
he recalled the lightness of that walk,
how all hunger vanished.

from Dreaming of the Rain in Brooklyn

EVEN THE DOG TOOK ON VULNERABILITY

How godly & sweet,
but if the leash snaps
as we cut across the road…

And the cranes,
how stately,
like a thicket of bald cypress
standing in shallow water,

And the poets, too, how facile
when they write of thrushes
gaunt, arthritic, or especially terrible.
Don’t believe them. It’s only a flourish.

They’re thinking of themselves,
of their parents’ reflections in the mirror
before sleep overtakes them
and they dream in the dumb
contrivance of words.

Waxwings don’t perish of old age.
They crash into power lines by Monte Vista,
fall in the hedgerows, picked off
by the dog running loose,
smother in the slick that oils the shallows.

Land in their own sweet Spring.

from Dreaming of the Rain in Brooklyn