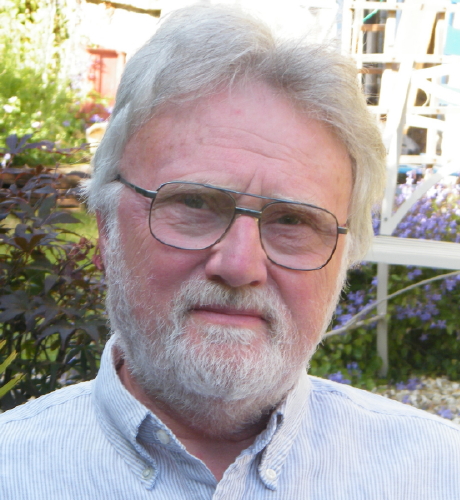 Good morning, everyone!  And a beautiful morning it is, too, here in the northeastern U.S., where we have so much to be thankful for, since our recent election.  We’re still trying to beat the corona-virus (I don’t want to capitalize the enemy), but as more of us get the vaccine, wear our masks and social distance, it will be over – not soon but eventually and perhaps while those of us who are reading this are still alive.
But enough of that depressing talk, and on to poetry, which so many of us know has the power to heal.

Our poet today comes to us from across the pond.  Chris Waters is a London-born poet and musician, born in 1946, which seems incredibly recent, now that time itself seems to have lost so much meaning.  Based in Devon since 2001, he has been performing with fellow poets, musicians and the spoken-word groups, Visible Ink and Que Pasa?  in touring productions all over the U.K.

Chris and his wife Sandra, each of whom has two adult sons, having moved to the West Country, now enjoy what he calls a “post-urban” lifestyle amid rolling hills, high moors and a rugged coastline.  They live in a converted barn, and their present home is a “great source of pleasure, tranquility, French Beans and backache,” he tells us.

Like many of the poets we have featured, Chris has a distinguished academic background.  He studied English and European literature at the radical and innovative University of Sussex and followed that with an M.A. on Eliot, Wordsworth and Coleridge.  He also holds a Diploma on Drama in Education and Therapy from the University of Newcastle.

Since leaving full-time college teaching in 1998 and continuing to write poetry, Chris has embraced a portfolio of activities that include furniture-making, storytelling, and playing in a Senior rock band. Together with his sister-in-law, a graphic designer, he has developed a publishing company, Mudlark Press, which brought out his own first collection, Arisaig, and has since published many other fine books.  His own Mudlark collections include Through a Glass Lately (2014) and Dancing Satyr (2018), and he has already won several UK poetry prizes, including the Bridport and the Plough.

It’s my pleasure today to bring you a few poems by Chris Waters: “Ancestors,” “A Woodcut for Tu Fu” and “His Signature.” Although we usually feature only three, I’m including an extra one this time that I found irresistible: “Epitaph for a Politician.”  Had I world enough and time I would include more, especially one dedicated to his tutor and poetic hero, Seamus Heaney.  But you will have to find more of his poems for yourselves. You won’t be disappointed.

Earth-steppers  ourselves, making our own tracks,
sometimes we might glimpse them through leaf-light,

in a clearing, treading between felled timber
and a crackling fire, where their kettle spits;

or perhaps as we look down from the tree-line
to where they bend low in a harvest field,

will we catch their murmur, as they squint
to sense our future shadows  passing by?

But why not summon those two – drain-cutters
in their master’s claggy field, clabbered

hand to foot in Kentish clay, a slashed-pumpkin
grin across their faces, as they brandish

their unearthed trove – a pair of torcs that will gleam
brighter than any sheaves in August sun?

Light their candle, pilgrim, then pass.

A Woodcut for Tu Fu

Trace the contours of the grain
in a weathered Cherry board;

score with a sharp edge finely
for distant-mountain-woods,

but gouge deep for winding
rivers, war-zones and exile-spaces

between one abandoned home
and the next; suggest geese

in flight, returning, high
above his blossoming Cherry,

where a rough table’s been set
with two full cups of wine;

blacken the block with fresh ink,
press home the page – and listen out

for the echo of two old poets, laughing.

Is maybe the Manhattan skyline,
Its infallible Towers
Spiked with diamond light

Or a seismograph, or fever-chart –
Fissures and tremors,
Reverberations, deliriums

He caps his Golden Pen, closes
The Black Folder. Fiat.

Epitaph for a Politician

Given his plausibility,
His telegenic charm,
Ask how much damage he bequeathed,
How much consequential harm.