Adam Shatz’s articulate review of Jean Daniel’s “The Jewish Prison: A Rebellious Meditation on the State of Judaism,” sounds remarkably similar to the fundamental principles of Sandor Gilman’s 2003 critique of contemporary Jews. This is ironic and more powerful since Daniel writes as a French intellectual (influenced by his North African ethnicity) and Gilman is an American. But listen to the similarities.
Gilman insists that through history Jews have lived on the periphery of societies, and where they are found, are involved contentiously. He insists that this is a foundation of being Jewish. He suggests that Jews should not have a country of their own, lest this undermine (his concept) of being fundamentally Jewish. “Jews have always functioned as a permanent symbolic frontier” (Jewish Frontiers, p. 18). From this periphery, Jews should observe, critique others. Further, “all Diaspora societies in which Jews live … are places of contention and
complexity for Jews.” Like the “blessing” Jacob made on his deathbed to one of his sons, the Jews should eternally, or at least perpetually nip at the hind parts of others. 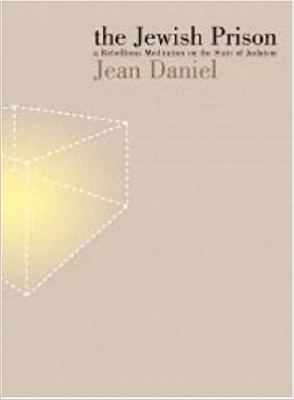 Daniel too suggests that a fundamental part of Jewish identity is to “serve” others, specifically as “witnesses” and “prophets.” (But, prophets tend not to be well-received: the biblical ones spent much
time hiding in desolate wadis so that they would not be killed.) Daniel at the same time wishes or demands that Jews (at least in France) integrate (assimilate). The recent shift he notes in French Jewish identity — particularly of his more recently arrived North African brethren — towards greater “ethnicity” and love of Israel, troubles Daniel. Yet, ironically, Daniel, a professed non-religious man, turns to the biblical concept of “chosen people” to demand witnessing and prophecy from Jews. He expects them to have a higher calling, a higher moral platform than other …. what: nations, peoples, religions, ethnicities. His idea sounds like the Jewish concept of “light to the non-Jews” (Or l’goyim): that Jews should be a guiding light to others, a stance that begets envy, acrimony.
But the reviewer adroitly captures several problems in Daniel’s argument, while praising him: first, Daniel’s bowdlerized version of the history of Jews in France; second, who or what are these people
Daniel calls Jews. Daniel starts with the extraordinary French decision to give Jews citizenship in 1791, then extols the thriving of Jews in France. Yet, Shatz, almost by-the-by, reminds us of episodic French anti-Semitism,
starting with Abbe Gregoire’s (1789) statements about Jews’ “atavistic customs, deceitful habits and strange smells and vices.” or the Jacobins’ concern that 40,000 Jews were a threat to 28 million French;
or Drumont’s 1886 “anti-Semitic manifesto,” Dreyfus, up to DeGaulle’s gallingly shameful insistence that Jews are “an elite people, sure of itself and domineering.” A long history of Jew-hating French have, even as Jews have also thrived.
But the second dilemma Shatz articulates in his review, is whom Daniel is asking to be witnesses and prophets. Jews are not simply a religion, as are, for instance, Catholics or Moslems. Daniel states
he is not religious, but considers himself Jewish. And Jews are not simply a nation: certainly for two millennia, they had no country; even now, those who live outside Israel can consider themselves Jewish. And certainly odd to consider Jews an ethnicity: how to reconcile the ethnicity of Yemenite with Moroccan or Eastern European
or North American or Argentinian Jews? Perhaps Jews are a people, whatever this might be. But Daniel’s argument becomes more tenuous, particularly when this non-religious Jew cites biblical references to support his insistence that Jews are obligated, elected, to be witnesses or prophets.
In sum, Shatz presents well the problems with the arguments of this French intellectual, nearing the end of his life, who finds himself troubled by his Jewish brethren. Let us ask a different question of this fine intellectual. Why did you not write a book entitled, The French Prison, in which you would argue that the French should be witnesses and prophets, be more moral than others, hold themselves up to a higher standard and incur the danger to oneself in doing so? And the French would do this better without a nation, Daniel might have to argue.
An Israeli president on meeting secretly with an Arab leader, was challenged, “Who made you chosen!” To which the Jew responded, “You want the job?” Anyone else want the job? Please.

Previous post: For Armistice Day: The solider behind ‘In Flanders Fields

Next post: A Jewish Child and a ‘Nazi’ Child Remember Kristallnacht